We have begun a restoration on what began life as a late 50’s Chinese military motorcycle. It is patterned after the BMW R-71 of the late 30’s. A brief explanation of how this all came to be is that in Germany, BMW was happily building these wonderful bikes, but semi clandestinely, for the Third Reich’s military. Throughout the war, this and the other styles built with side-car capability saw service in many fronts, and all climate conditions, proving themselves both extremely capable, but durable as well.

Germany fell, and the segment of Germany that ended up in Soviet control was where the plant that manufactured the bikes was located. They became EMW, as the rounded part of the B was severed to form a new logo, with Blue replaced to Red. Soviet assistance given to China during the US military conflict in Korea saw them exchanging many things, with the pattern to this motorcycle and side car combination being amongst the materials exchanged. 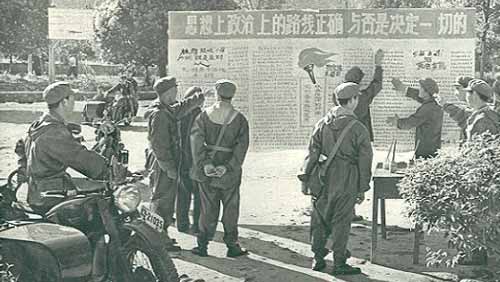 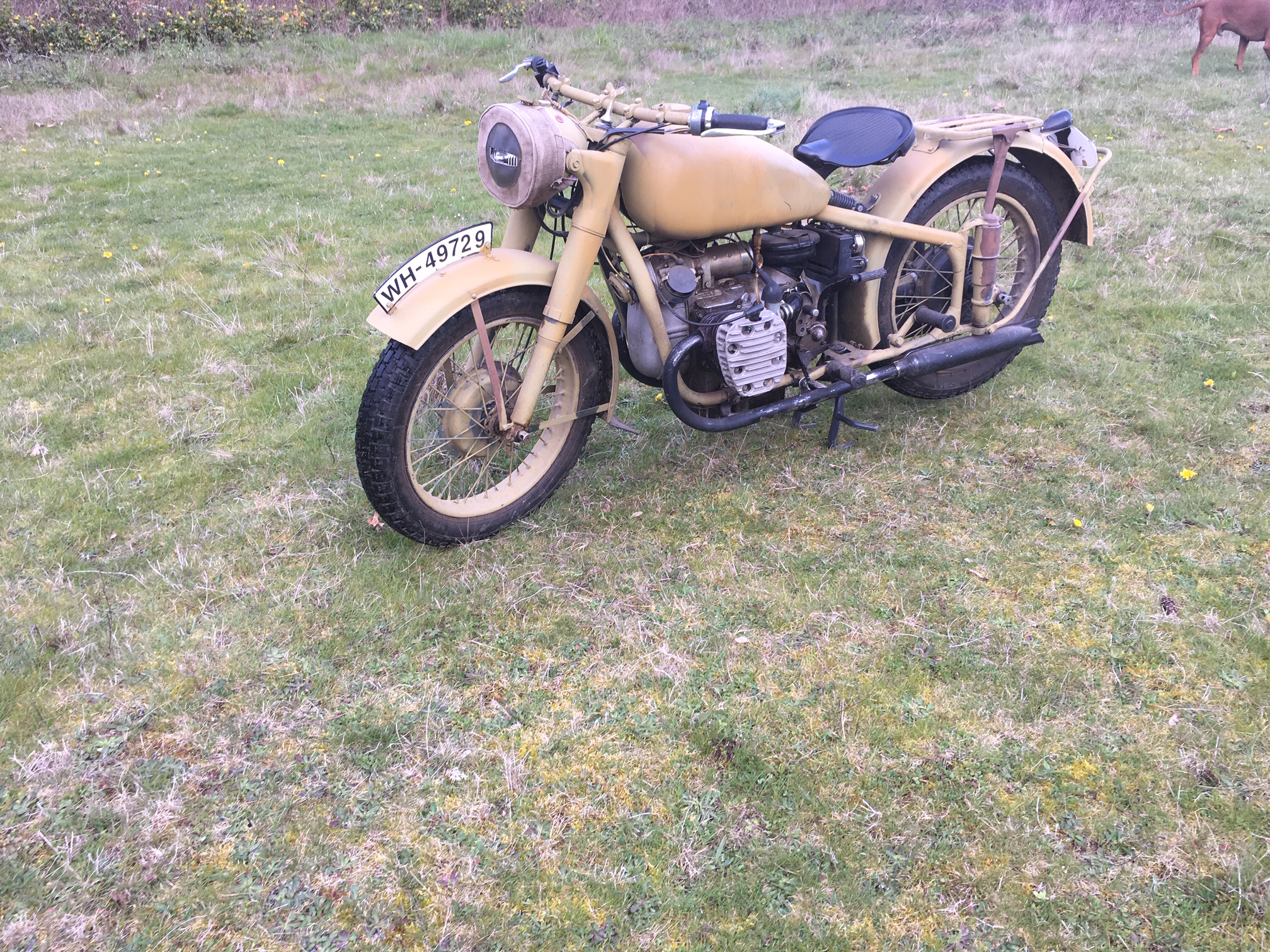 After riding it around the property during the initial phase of the lockdown in March 2020, I decided it would be good to get this bike to the shop to begin restoration, as soon as July 4th had passed.  I had been holding out, with the plans to ride this bike in US Infantry uniform, as a “Captured Bike” in our local parade. It did not happen, sadly. 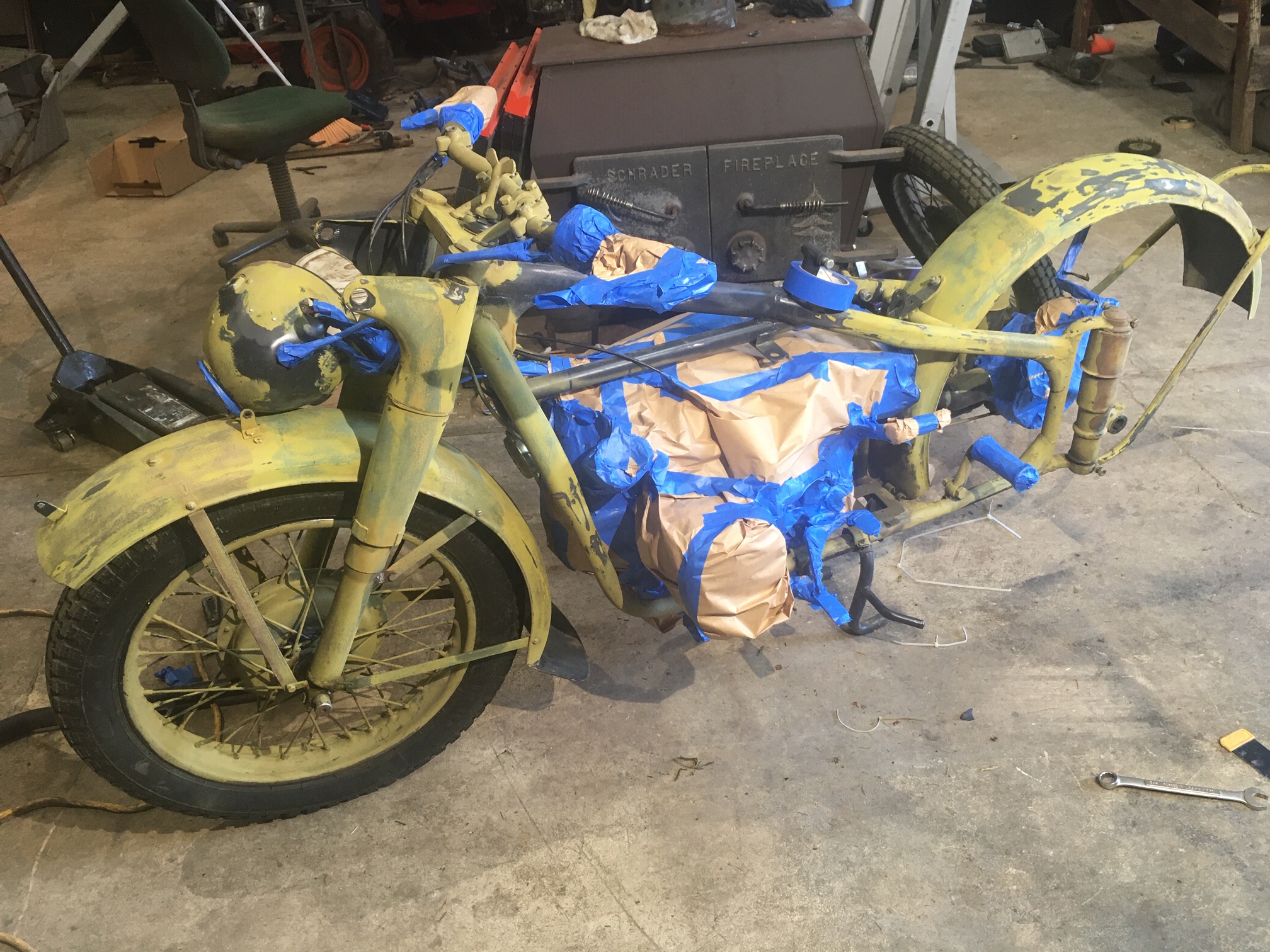 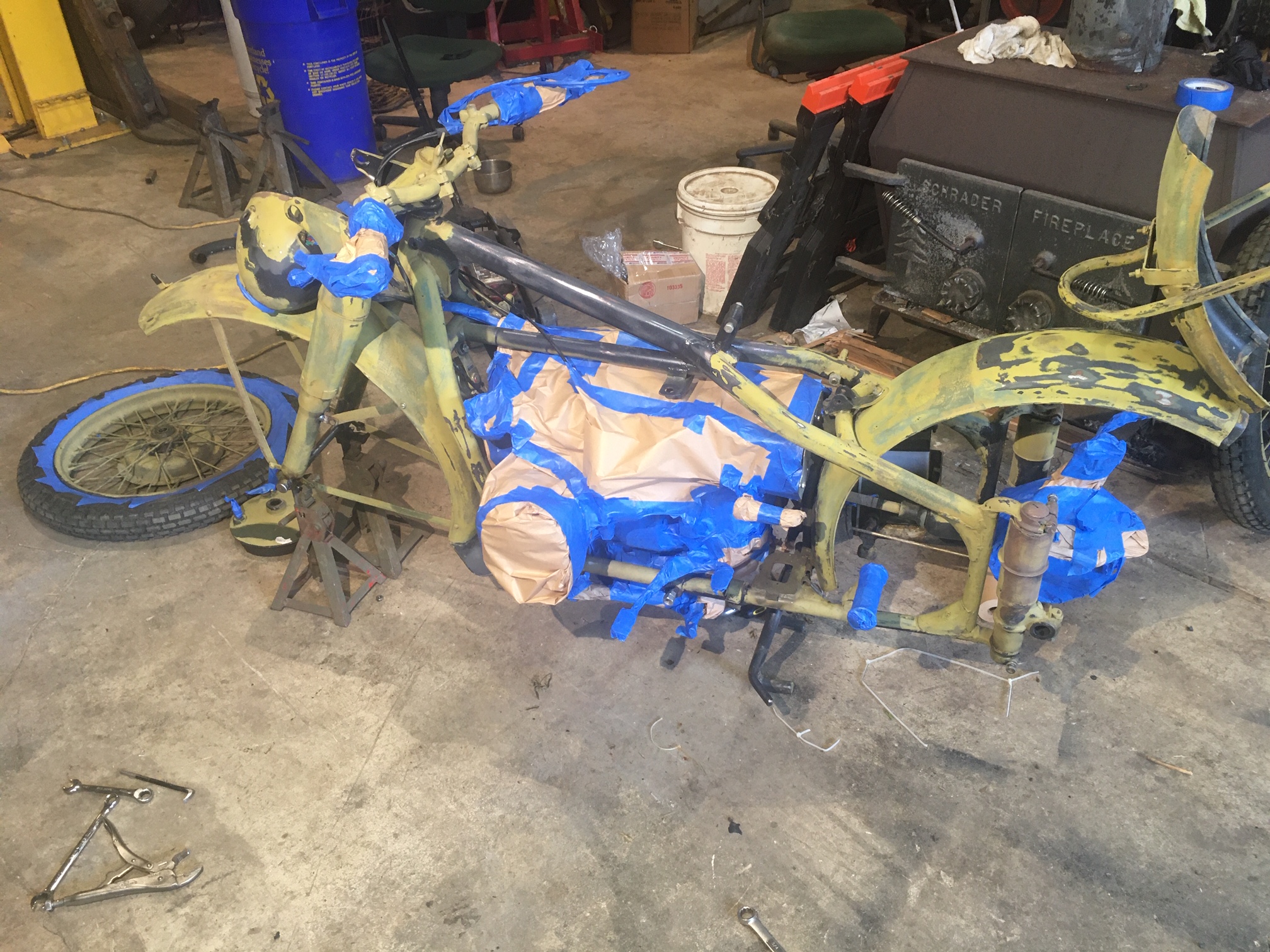 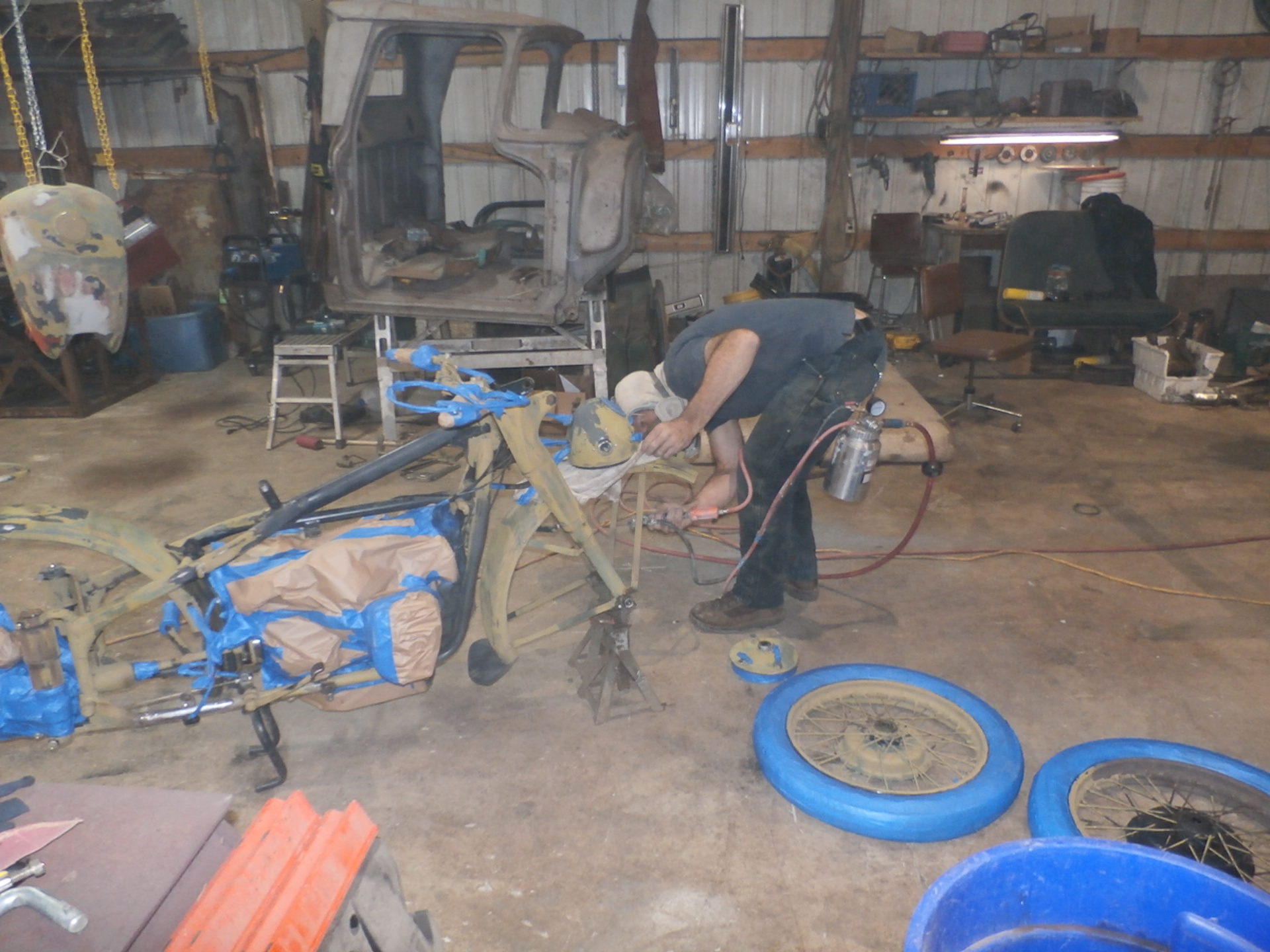 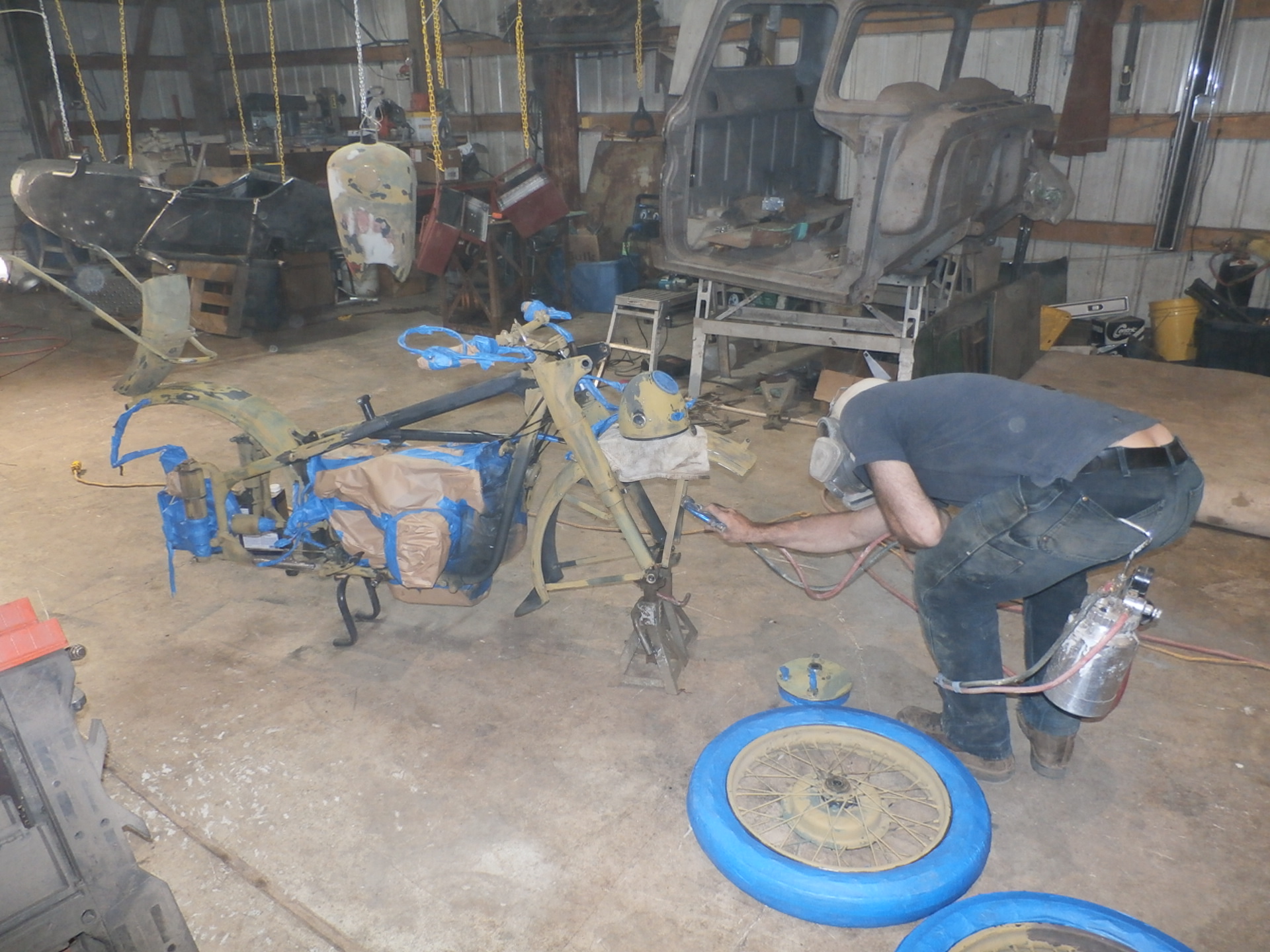 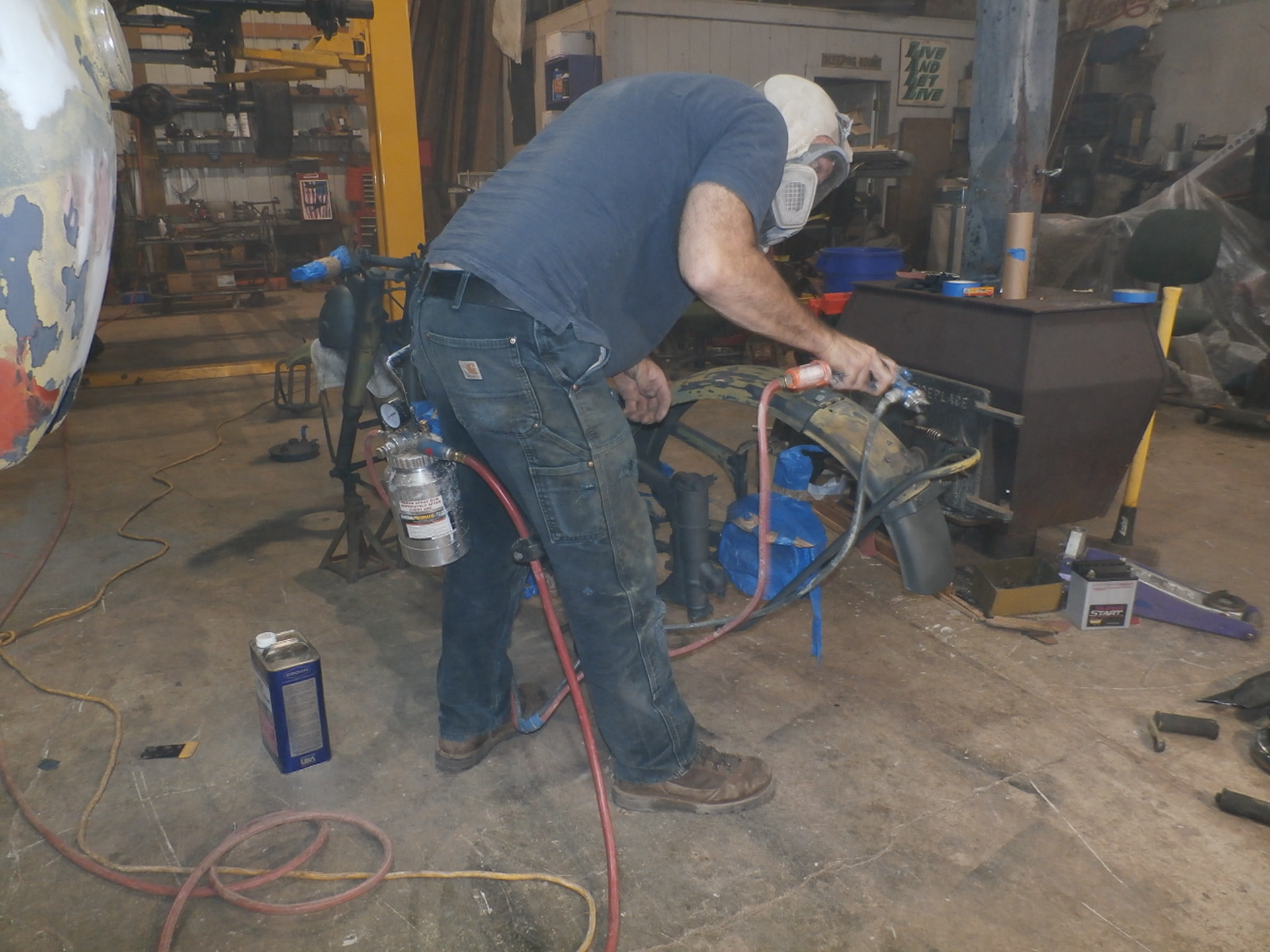 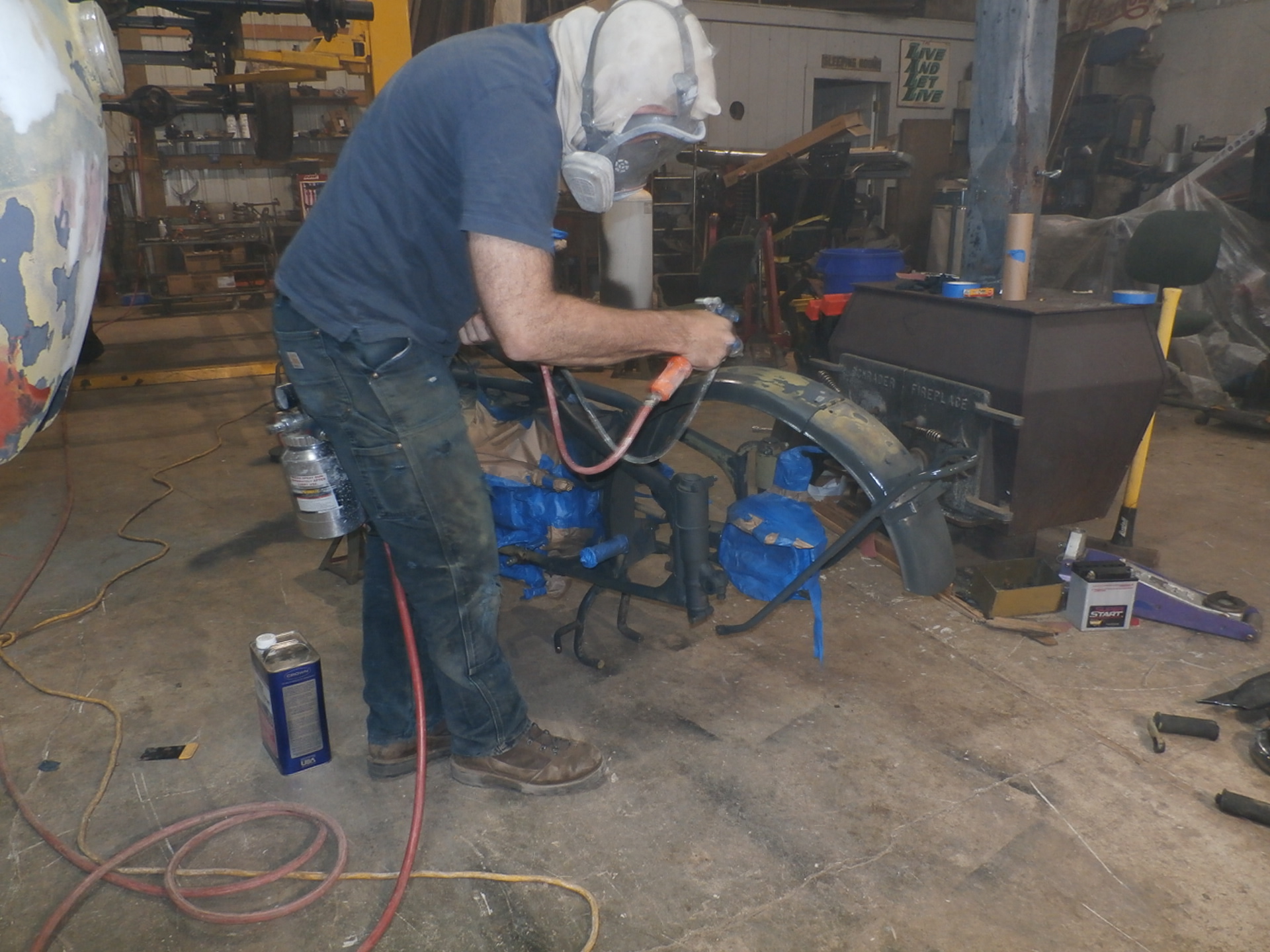 The progress was good today- July 23, 2020. I will return tomorrow and do a few minor repairs and to spray the headlight ring and hardware.

So, July 24 saw me mounting the MG-42 Mount to the side-car, and begin the process of reassembling things.  It is coming along nicely.

Once it is all assembled, we will pull the ammo cans off and give it one more re-spray, but the majority of the paint is complete. 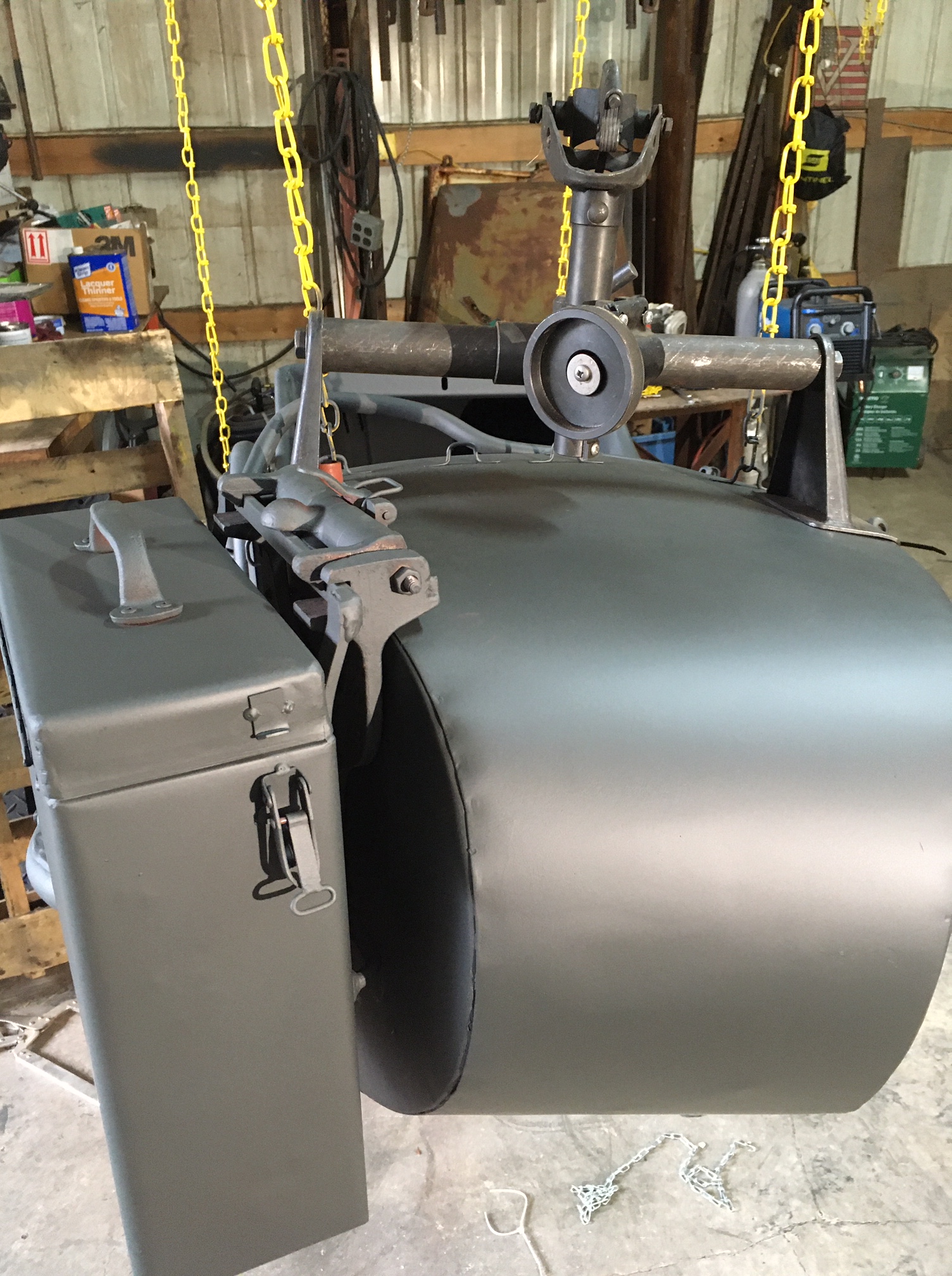 And here, we are re-attaching the side-car to the frame of the motorcycle, with the help of an older padded blanket placed over the pallet for protection of the new paint. 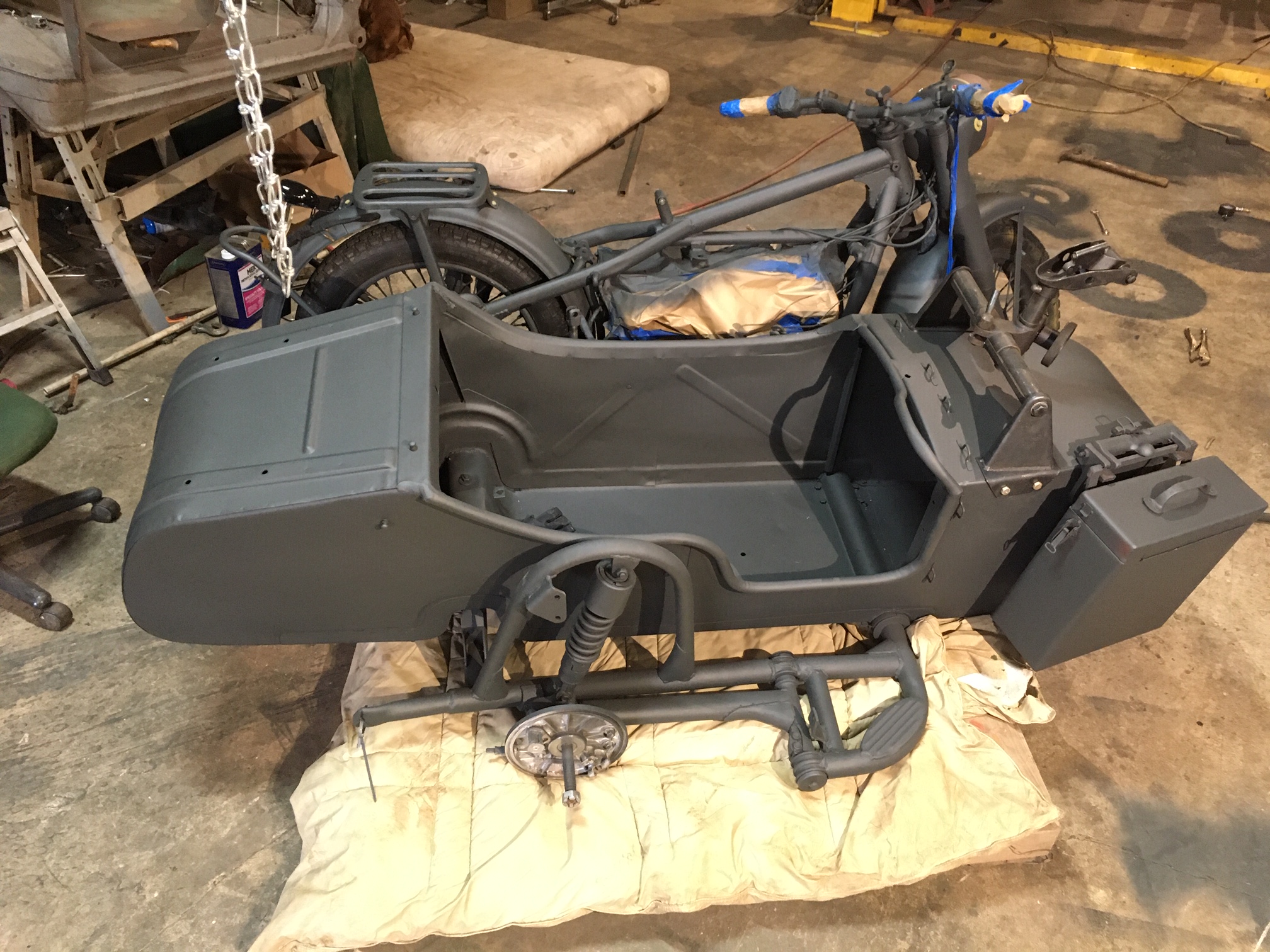 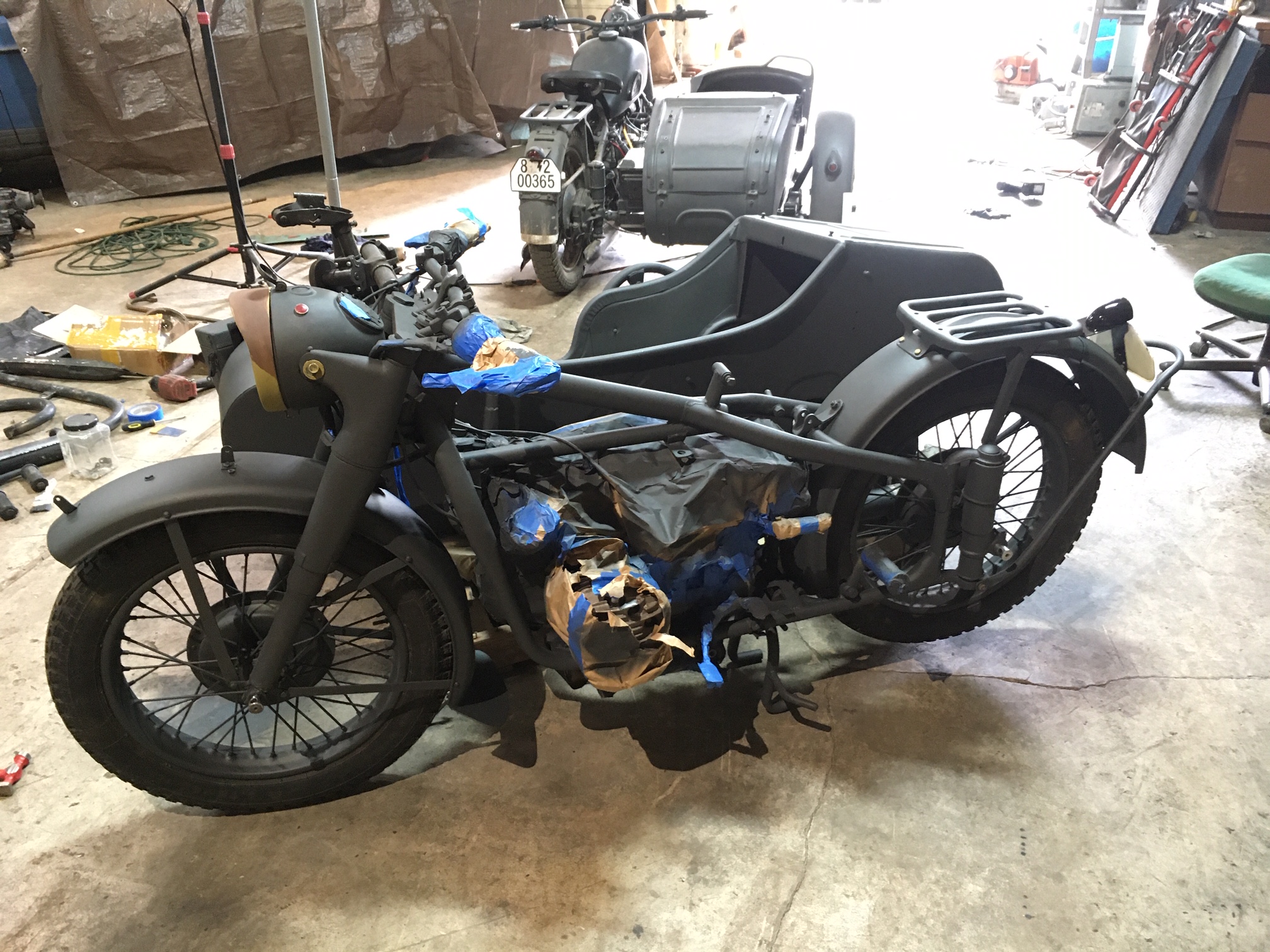 Finally, our newly formed side-car fender has arrived from Austria.

This fender took nearly 3 months to arrive from Europe- a shipment that usually would take two weeks prior to Covid-19 changing international shipping.  Needless to say, it is VERY appreciated, and seeing it in the shop when I get there in the mornings is a very nice thing.  It will see two coats of Panzergrau Lacquer paint, before being attached to the bike-

Battlefind will gladly restore your machine, either partially, or frame off total restoration, if required

battlefindrestorations@gmail.com
We are working in the shop nearly full time, and are available for consultation on your restoration project 24-7